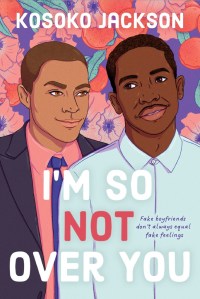 Title: I’m So Not Over You

☆☆ARC provided by Publisher in exchange for an honest review☆☆╮

What would you do if your ex sent you an urgent text to meet him at a café post break up? Kian Andrews has had many thoughts and emotions since last seeing his ex Hudson Rivers. Could he possibly be having second thoughts about their break-up? or an apology? What he wasn’t expecting was for Hudson to ask a huge favor, to fake date him for the sake of getting his wealthy parents off his back. Hudson hasn’t given into his family’s wishes of joining their business, instead he’s chosen to carve his own career path. His relationship with Kian was something his parents not only accepted but praised him for. 𝗜’𝗺 𝗦𝗼 𝗡𝗼𝘁 𝗢𝘃𝗲𝗿 𝗬𝗼𝘂 is a queer second chance romance paired with some fake dating that is set between New York City and Georgia. Our MC’s are from very different socioeconomic backgrounds and are night and day in personalities making a strong case for opposites attract. We follow this couple as they revisit old wounds and decide whether or no their relationship deserves another go around.

This is one romance I wish had been more fleshed out since it featured the second chance trope. I really wanted to know why Kian and Hudson broke up in the first place…was it differences in socioeconomic class? Kian’s constant commentary on these differences? or was it something entirely different? I still feel the reason was needed before plunging into the fake dating negotiations that took place. 𝗪𝗵𝗮𝘁 𝗜 𝗟𝗼𝘃𝗲𝗱? I enjoyed Kian’s sarcasm and dry humor when met with Hudson’s southern charm, their on the page chemistry that made for *chefs kiss* steamy scenes, a supportive friend group, the presence of strong sibling bonds, and female side characters who are driven and fiercely independent. There was enough witty banter and intriguing side characters in this book to guarantee I pick up whatever Kosoko Jackson writes next 🖤