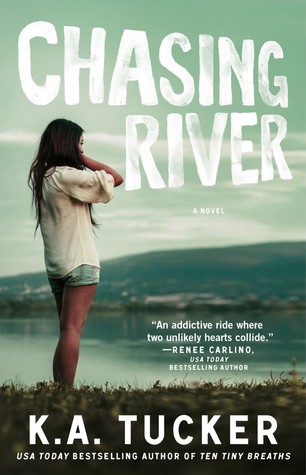 Armed with two years’ worth of savings and the need to experience life outside the bubble of her Oregon small town, twenty-five-year old Amber Welles is prepared for anything. Except dying in Dublin. Had it not been for the bravery of a stranger, she might have. But he takes off before she has the chance to offer her gratitude.

Twenty-four-year-old River Delaney is rattled. No one was supposed to get hurt. But then that American tourist showed up. He couldn’t let her die, but he also couldn’t risk being identified at the scene—so, he ran. Back to his everyday life of running his family’s pub. Only, everyday life is getting more and more complicated, thanks to his brother, Aengus, and his criminal associations. When the American girl tracks River down, he quickly realizes how much he likes her, how wrong she is for him. And how dangerous it is to have her around. Chasing her off would be the smart move.

And River isn’t the kind of guy she’d want to catch.

Having loved the previous two books in this New Adult series, I’m not sure why I went into this one with some sort of skepticism. I thought that I couldn’t love a new couple more than I already do Jesse/Alex & Rain/Luke…Once again K.A. Tucker has managed to suck me in with her deeply layered characters, beautiful settings, and crazy story telling. I ADORE Amber & River to pieces!!!! This time we were transported to beautiful Ireland & given a good amount of historical background on the events that lead to the formation of the IRA. Up until this book, I only knew of the great famine in Ireland but not much more. It’s only a plus when I come away with knowledge of actual historical events from a book that isn’t non-Fiction. We also get to see some of our favorite characters from Burying Water (Burying Water#1)  make an appearance in this book in K.A. Tucker fashion. Rich with Irish history, obstacles to overcome, violence, and amazing characters, this story of 2 lovers from opposite sides of the world was a smash hit in my book!

I totally did NOT see myself liking Amber at all in this book since I did NOT enjoy her parts in Burying Water. Amber was very judgmental & was comfortable being a part of the “mean girls” clique during her High School days. As an adult, she never ventured outside of her small town nor did she attempt to look outside the box. There were rules & Amber followed them to the tee. My biggest issue with Amber was how harsh she was on her brother Jesse in Burying Water, it was as if she chucked him off to be a low life because of some mistakes he had made as a teenager (given Jesse was a magnet for shit but still lol). I LOVED seeing Amber step away from her small town in Oregon & travel to Ireland. Her family doubted she would ever leave her comfort zone & it was a major step for her. Amber meeting River may not have been in the most romantic of ways (I won’t give that away), but from the minute he entered her life, all her inhibitions were thrown out the window. Now this is an Amber that I could be friends with. From her unlikely friendship with the tattoo artist Ivy to falling in love with River whose family history was deeply entrenched in the IRA of before & current day…she kept surprising me. I loved the travel bucket list she created with Alex the night they were a bit tipsy on wine & the fact that River managed to get his hands on it & continued to tease her about it. Actually, being that I got to know her as a rule follower, I was a bit embarrassed for her every time I thought about #1 on her list… <—BWAHAHAHA! I would’ve DIED if it were me & the hottie I’m interested in, found my list. Then again I was kind of smirking BECAUSE for a change, she was the one chasing the guy and putting in some work (he really did make her work for it though lol). This book also stirred up so much hope in me for these two, I wanted so badly for everything to work out but it seemed that all odds were against them. There were definitely some casualties along the way…I cried when Rowen’s leg had to be amputated & cursed Aengus all throughout for putting Ma & Da through it. I am currently jumping right into the last book in this series Surviving Ice (Burying Water #4). I’m excited to get Ivy’s story & even more eager to see if there’s a glimpse of Amber & River because it’s K.A. Tucker & I love all of her characters! it always feels like a treat when we hear about one of the couples or characters from the previous books.