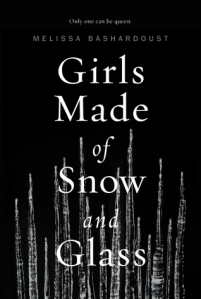 Title: Girls Made of Snow and Glass

*Opted to leave out the Goodreads Synopsis this time as I usually do whenever it’s too spoilery. With so many unique twists, this is one you’ll enjoy unraveling yourself sans the blurb 😉

Girls Made of Snow and Glass is THE modern Snow White  re-telling I’ve been waiting for since the day I realized I didn’t need a Prince Charming to come rescue me on a horse. When I started questioning fairy tales & the incompetence of Kings all the while they had a kick a** intelligent Queen sitting on the sidelines. With an almost entirely female cast, GMOSAG gives the classic fairy tale a unique and fresh spin that will leave you feeling empowered by the very last page. Perhaps most importantly it shatters the clichéd belief that women in leadership roles cannot co-exist. In our cast we get a new Queen to a widowed King, a female Surgeon in service to the King, and a court council run by women. The men in this re-telling play the role of secondary characters.

Told in third person POV, we get both Mina (new Queen) & Lynet’s (King’s daughter) stories in past and present times. Mina’s story unfolds in an earlier time when she first met the King at the age of 16 & decided she wanted to be Queen. Living in a village with her Magician father has been no easy feat, feared by the townspeople in the South for her father’s abilities. Mina herself is walking talking proof of his abilities. Having died & been brought back to life with a heart made out of glass, Mina has been raised by her father to believe she neither has the power to love or be loved & that her beauty is her only asset. Mina however proves to be resourceful & intelligent, always observing human behavior. She studies the King and soon realizes that his daughter is all that he cares about. Never once did she expect to get attached to the Kings young daughter Lynet or what that could potentially spell for her future as the present Queen. We follow Mina as she helps raise Lynet from toddler to young adult all the while thinking that their future rivalry is inevitable.

Each of these characters came to life on the page. Well fleshed out, complex, and flawed they rope you into this cold tale of love, loss, grief, and ultimately defining what family is to you…

Mina- I love my villains, they often bring the most meat to a story & such is the case with Mina. She comes from the South where everything is warm and lush with life & the transition to Whitsespring castle in the North is the total opposite. This however doesn’t stop her from fulfilling the role of Queen & stepmother to young Lynette. Although she lacks a beating heart, a part of her wants so badly to feel loved. Her marriage to the king isn’t what she expected but she never once takes it out on Lynette. I don’t want to give away too much but this is one character I really enjoyed seeing develop. She isn’t the evil Frost Queen we all come to expect from fairy tales but I can appreciate that since women in  power are already thought of as Frost Queens in real life & I can do w/out that in my books 😉

The King- My least favorite of the characters for oh so many reasons! but the biggest one being that he’s down right selfish. Yes, he’s a wonderful doting father but once you read this book you’ll see a man who just couldn’t let go.

Lynet- Besides Mina, I actually really enjoyed Lynet’s character. She knows her father sees her late mother in her & that he’s raising her to one day be Queen. Trying to fill her mother’s shoes however isn’t something she wants. Far from it, Lynet enjoys scaling castle walls & s spying on people…particularly the new Surgeon *smiles* there’s also more to Lynet than meets the eye but that would be spoilery so I’ll leave you to find out that interesting secret on your own 🙂

Nadia- new surgeon in service to the crown, Nadia spends her days in her laboratory poring over her books. The friendship to romance progression with Lynet was on point! I was rooting for these two all along 🙂

The Magician aka Mina’s father- Adding this guy to my list of most hated villains of all time! I’m beginning to see a trend with Magicians being this nefarious. This man seriously takes the prize though! playing all his cards close to his chest, he is one to keep an eye on.

Girls Made of Snow and Glass is easily one of my favorite Snow White re-tellings of all time. I was the kid who had no interest in Prince Charming. No, my interest was more with ingenuity…always asking why the princess had to wait in the tower instead of finding a way out. This is the Snow White story that I’ve been waiting for with messages of female empowerment & Queens that don’t need saving. I LOVED the fact that this was a mostly female comprised cast & that we got LGBTQIA+ representation. The only reason I docked GMOSAG 1 star is because of the very slow pacing all throughout. There aren’t fast paced action sequences, this is a story told primarily through dialogue and stream-of-consciousness. That being said, I was invested in these characters til the very end. The last line in this book is PURE PERFECTION!

*HUGE Thanks to Flatiron Books, Netgalley, and Melissa Bashardoust for the eGalley of Girls Made of Now and Ice in exchange for an honest review.

24 thoughts on “Book Review: Girls Made of Snow and Glass by Melissa Bashardoust”

Did I stay up until 2am finishing this book? Yes…yes I did and although I’m feeling it at the moment, I also have no regrets. Hands down a compulsive read that is equal parts character and plot driven, this is one you can’t put down for long. Some reviewers say this has Riverdale Vibes and I’d have to agree. We have an academic setting with seven characters who’ve gravitated towards each other and have a complex friend group. It’s told in past and present timelines from mostly Jessica’s POV, she is an unreliable character with one hell of a narcissistic personality and fits the bill as far as unlikeable characters go. We get to slip into some of the other characters POV as they recount their version of events. Ten years ago, one of the friends was murdered on campus and most walked away ready to leave that all behind. Someone decides to make Homecoming the time to lure out the killer to carry out overdue justice which triggers the unraveling of secrets, lies and betrayals within their friend circle. This was fast paced with the first half reading a bit lighthearted (when compared to the latter half this almost seemed like the “good times”)as we see these characters living their best college lives, dating, and dealing with baggage that stems from unhealthy/toxic relationships with their parents. The second half was like watching the domino effect set off, at which point there is no turning away. Dark & filled with obsession, greed, vanity, violence and narcissism…I don’t think I’ve ever read something so wrong yet also satisfying that I’m still processing that ending. Also, other than Coop I can’t really say I liked any of these characters but I found myself 100% invested in all of their lives. In any case, this author is now on my radar for future reads.
╰☆☆ “𝐋𝐢𝐤𝐞 𝐬𝐡𝐞’𝐝 𝐜𝐨𝐦𝐞 𝐭𝐨 𝐭𝐡𝐞 𝐞𝐧𝐝 𝐨𝐟 𝐚 𝐒𝐜𝐨𝐨𝐛𝐲-𝐃𝐨𝐨 𝐞𝐩𝐢𝐬𝐨𝐝𝐞 𝐚𝐧𝐝 𝐩𝐮𝐥𝐥𝐞𝐝 𝐨𝐟𝐟 𝐡𝐞𝐫 𝐨𝐰𝐧 𝐦𝐚𝐬𝐤, 𝐫𝐞𝐯𝐞𝐚𝐥𝐢𝐧𝐠 𝐭𝐡𝐚𝐭 𝐚𝐥𝐥 𝐭𝐡𝐢𝐬 𝐭𝐢𝐦𝐞 𝐬𝐡𝐞’𝐝 𝐛𝐞𝐞𝐧 𝐩𝐥𝐚𝐲𝐢𝐧𝐠 𝐭𝐡𝐞 𝐩𝐚𝐫𝐭 𝐨𝐟 𝐇𝐚𝐩𝐩𝐲-𝐆𝐨-𝐋𝐮𝐜𝐤𝐲 𝐏𝐚𝐫𝐭𝐲 𝐏𝐥𝐚𝐧𝐧𝐞𝐫 𝐰𝐡𝐞𝐧 𝐢𝐧 𝐫𝐞𝐚𝐥𝐢𝐭𝐲 𝐬𝐡𝐞 𝐰𝐚𝐬 𝐭𝐡𝐞 𝐭𝐞𝐫𝐫𝐢𝐟𝐲𝐢𝐧𝐠 𝐄𝐝𝐮𝐜𝐚𝐭𝐞𝐝 𝐖𝐨𝐦𝐚𝐧 𝐨𝐟 𝐂𝐨𝐥𝐨𝐫" ☆☆╮
Happy Monday Book Lovers! And a Fantabulous Monday it is simply because I’ve read my first 6 star read of the year! I’ve had Ashley Herring Blake on my radar for a while now & even own a copy of 𝐺𝑖𝑟𝑙 𝑀𝑎𝑑𝑒 𝑂𝑓 𝑆𝑡𝑎𝑟𝑠 that I really should get to, but this is her first adult romance and it quite honestly is the 𝗕𝗘𝗦𝗧 sapphic romance I’ve ever read. I am not one to fan cast when reading but I just couldn’t get Christina Hendricks (Made Men) and Laura Prepon (OITNB) out of my head. They are Delilah and Claire in my head & heart. Delilah Green Doesn’t Care hits shelves February 22nd - 𝗪𝗛𝗔𝗧 𝗬𝗢𝗨’𝗟𝗟 𝗙𝗜𝗡𝗗...
╰☆☆ “𝐓𝐡𝐞 𝐜𝐥𝐚𝐧 𝐢𝐬 𝐦𝐲 𝐛𝐥𝐨𝐨𝐝, 𝐚𝐧𝐝 𝐭𝐡𝐞 𝐏𝐢𝐥𝐥𝐚𝐫 𝐢𝐬 𝐢𝐭𝐬 𝐦𝐚𝐬𝐭𝐞𝐫. 𝐎𝐧 𝐦𝐲 𝐡𝐨𝐧𝐨𝐫, 𝐦𝐲 𝐥𝐢𝐟𝐞, 𝐚𝐧𝐝 𝐦𝐲 𝐣𝐚𝐝𝐞.” ☆☆╮
🎉🥂𝐵𝑖𝑟𝑡ℎ𝑑𝑎𝑦 𝐺𝑖𝑟𝑙 ℎ𝑒𝑟𝑒🥂🎉
╰☆☆ 𝓣𝓱𝓮 𝓦𝓲𝓷𝓽𝓮𝓻𝓷𝓲𝓰𝓱𝓽