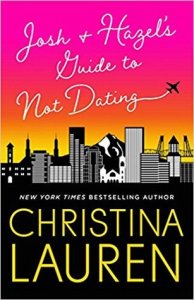 Title:Josh and Hazel’s Guide to Not Dating

🦋 ARC received in exchange for an honest review 🦋

I’m newer to the Contemporary Romance genre than most of my Blogger friends but Christina Lauren is a name I’ve heard float around since the beginning of my blogging journey. I came across Josh and Hazel’s Guide to Not Dating on Bookstagram & of course the colors caught my attention for a potentially fun read 💓 Happy to report that it is most definitely one of the MOST fun reads I’ve read in a long time. I laughed & giggled so much and also just rooted for a new found favorite character. Hazel & Josh are the definition of night and day but also give truth to the saying “Opposites attract.” I enjoyed getting to know these two characters over the course of several bad double dates and shook my head so many times reading my first ever friends to lovers romance. Funny & a downright blast to read, I’d easily recommend this book for a good time. Weaved throughout the story is a awesome F/F friendship, A+ sibling relationship, and Korean-American rep.  I also might be a little biased only because Hazel reminded me SO much of Polly Prince from Along Came Polly who I absolutely ADORE for all her unapologetic quirks and eccentricities 🙌🏽

These characters were so much fun getting to know and although Hazel and Josh are the MC’s, I also included a side character. Emily is BFF to Hazel & also Josh’s sister & many times fills the role of translator between the two. Emily knows her brother & BFF better than they know themselves and really does have both their best interest in mind. One of the best examples of F/F friendship #GOALS I’ve found on the page.

Hazel– Quirky, eccentric, free spirited, feminist AF, and openly admires Josh which really made for some of the funniest lines. Hazel is a teacher & everything from her quirky clothing to her love of animals make her the complete opposite of Josh who she’s known since college. Hazel’s unbending will to stay true to herself made her an instant fave for me & I just LOVED the message she sends out with regards to self acceptance 🖤

“The world seems full of men who are initially infatuated by our eccentricities, but who ultimately expect them to be temporary. These men eventually grow bewildered that we don’t settle down into calm, potential-wifey girlfriends.”

Hazel’s mother is also briefly mentioned but we get enough to know where Hazel’s beliefs come from. Having a mother who was unhappily married to a man who never accepted her quirks, Hazel looks up to her mom for having the strength to move away from that. It isn’t about changing the person you’re with, it’s about loving them for all of the things that make them stand out 🖤

“I realize that finding the perfect person isn’t going to be easy for me because I’m a lot to take” she says, “but I’m not going to change just so that I’m more dateable.”

Josh/Jimin- a Korean-American doctor Hazel went to college with but has since lost touch with. Once she recognizes him as the guy she sort of had an embarrassing encounter with & that he’s her BFF’s brother, the fun really begins haha! Josh is legit the complete opposite of Hazel & often looks upon her with awe although he’d never tell her as much 😂 Josh is reserved and quiet, he has a rough start in the beginning of this story as he navigates a long distance relationship gone cold. Josh is also traditional & very close to his parents who he hopes to one day take care of as the only son which is also a part of Korean culture. The moments Josh found himself admiring Hazel were some of my fave parts…

“I could never quite tell whether she was oblivious or just didn’t care what people thought, but no matter how chaotic she was, she always managed to give off an innocent, unintentionally wild vibe”

Emily- I realize I started this segment of my review talking about Emily for being such a FAB friend to Hazel & caring sister to Josh but she really does deserve her own spot here. Emily truly cares about Hazel & accepts her as she is. Knowing how different & sometimes vulnerable Hazel can be, seeing Emily talk to Josh and question him to make sure he doesn’t do something he may later regret was really indicative of the kind of friend she is.

“I think that’s the one thing that could dim her light. We both know Hazel is a butterfly. I think you have the power to take the dust from her wings.”

This being my first Christina Lauren read, I can now say it won’t be my last. I actually already have a copy of Roomies on deck I can’t wait to get to & I’m sure will also love. This was the perfect read this Summer & also a perfect pick for #SMUTATHON which was a read-a-thon hosted by Lainey from GingerReadsLainey & Riley from RileyMarie that was SOOO much fun to participate in! This book had me in stitches at some points while in others I was red in the face embarrassed for Hazel’s predicaments haha! It was a fun  slow burn/friends to lovers read that kept me flipping pages through the night. The two reasons I docked a star was for the fast paced ending that didn’t match the tempo of the book as a whole & made it feel a bit rushed. Lastly, there is a conversation that takes place where a character mentions how a homophobic slur was used. Although it’s made clear that it was used in a negative light, it did leave me bothered to read it on the page and made me question the need for it in this story. It didn’t really serve a purpose at all & it was someone who isn’t a character in this book who said to begin with…just seemed like something that could’ve either been challenged by a character in the book or just completely left out. Overall I HIGHLY enjoyed this book, characters, and writing! Christina Lauren has now joined the ranks of my fave Contemporary Romance authors & I will most certainly read whatever they write next 🖤

🦋 Quotes taken from ARC/pre-publication & may be subject to change

Hey Bookworms! This little Bookworm is struggling a little on day 1 of being back from vacay & would LOVE it if you could drop down into the comments with YOUR fave friends to lovers recommendations, I’d love you FOREVER! Well I already do but you know 💓