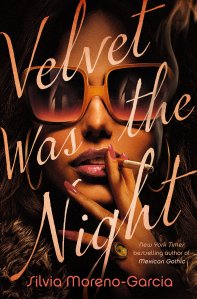 Title: Velvet Was the Night

1970’s Mexico City is where we meet our MC Maite, a Secretary with a passion for romance comics and a love for music records crooning lyrics she can get lost in. She doesn’t see much excitement in her life and can’t imagine that changing anytime soon, so she escapes into her comics where she envisions herself as the woman being swept off her feet by a handsome and daring man. This all changes when her neighbor hires her to cat sit and then mysteriously disappears, Maite sees herself thrown into the hunt for Leonora during a very dangerous time in Mexico. Elvis is a criminal who loathes violence and loves Rock ’N’ Roll (Presley is his idol), he was picked up off the streets and trained as part of a Paramilitary group called “The Hawks” in squashing student protests by brute force. He comes across Maite when his latest job has him looking for Leonora aka the missing woman. He’s ordered to watch her and begins to fall for the many things they share in common despite her not being his usual type.
🔥👄🚬🎶🔥
As a backdrop in the city, Sylvia Moreno Garcia writes of the very real life Corpus Christi Massacre that took place in 1971. When 10,000 student demonstrators set to the streets to peacefully protest oppression and demand Democracy. This was during the time Mexico was governed by only one party known as the PRI aka the Institutional Revolutionary Party which was viewed as a dictatorship. The “Halcones” or Falcones were a real pay-for-hire group trained by the CIA.
🔥👄🚬🎶🔥

As I make my way through Silvia Moreno Garcia’s backlist, I will start ranking them in hopes of a dedication post for my favorite author. 𝑴𝒆𝒙𝒊𝒄𝒂𝒏 𝑮𝒐𝒕𝒉𝒊𝒄 still reigns in my heart as my favorite SMG, however I really enjoyed this book. Maite will NOT be everyone’s cup of tea but I personally enjoy unlikeable characters. This book is heavy on the events that took place in Mexico during the 60’s surrounding students & government. If you enjoy having a bit of Historical Fiction weaved throughout or in this case where it’s the back drop, then you’ll probably really enjoy this one. I felt the author nailed it when she described it as having a very Pulp Noir feel, I definitely got those vibes. We have a mystery at the core, political unrest in the background, two MC’s with a deep appreciation of older Rock N’ Roll and career criminals in the mix. Silvia Moreno-Garcia is known for her signature mark of blending multiple genres, Velvet was the Night is a mash up of Mystery Thriller and Historical Fiction. I have come to expect to be pleasantly surprised every time I pick up a SMG book because I know that it won’t have the same feel as any of her other books. It’s become a little thrilling in a sense to see what she has in store within the pages of the next book. If you enjoy music while you read, check out SMG’s Velvet Was the Night Playlist on Spotify! 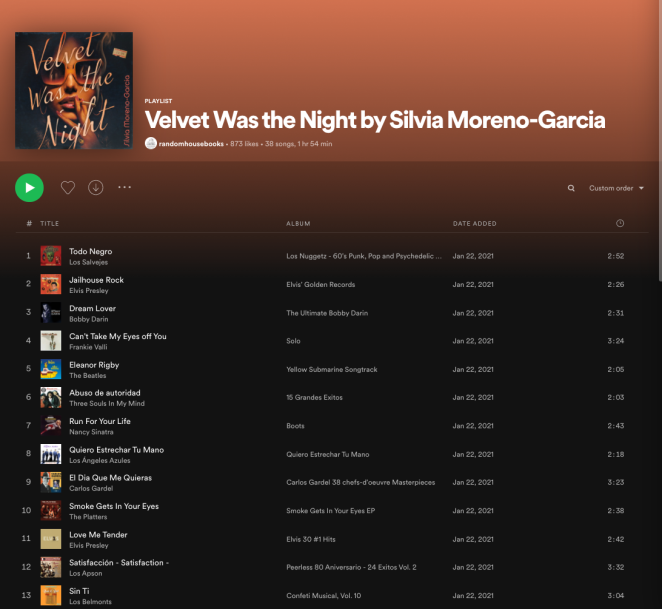