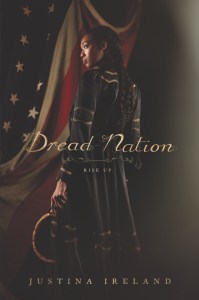 *HUGE thanks to Balzer + Bray/Harper, Edelweiss and Justina Ireland for the early review copy in exchange for my honest opinion

Jane McKeene was born two days before the dead began to walk the battlefields of Gettysburg and Chancellorsville—derailing the War Between the States and changing America forever. In this new nation, safety for all depends on the work of a few, and laws like the Native and Negro Reeducation Act require certain children attend combat schools to learn to put down the dead. But there are also opportunities—and Jane is studying to become an Attendant, trained in both weaponry and etiquette to protect the well-to-do. It’s a chance for a better life for Negro girls like Jane. After all, not even being the daughter of a wealthy white Southern woman could save her from society’s expectations.

But that’s not a life Jane wants. Almost finished with her education at Miss Preston’s School of Combat in Baltimore, Jane is set on returning to her Kentucky home and doesn’t pay much mind to the politics of the eastern cities, with their talk of returning America to the glory of its days before the dead rose. But when families around Baltimore County begin to go missing, Jane is caught in the middle of a conspiracy, one that finds her in a desperate fight for her life against some powerful enemies. And the restless dead, it would seem, are the least of her problems.

Ever pick up a book & you just know it’s going to be a 5 star read?!?! that was the case with this magnificent a** kicking, no-holds-barred, social commentary, read between the lines EPICNESS of a a book! It is not a re-telling although it definitely does allude to it’s namesake. I read a interview on Bustle with Justina Ireland where she says the following of her inspiration…

“I wrote [Dread Nation] many moons ago, after I read Pride and Prejudice and Zombies,” Justina Ireland tells Bustle. “Sure, you have well-to-do white women fighting, but it didn’t seem realistic. It would’ve been black women fighting in the streets.”

I happen to have really enjoyed Pride Prejudice and Zombies but I’d be lying if I didn’t say Dread Nation is now my FAVORITE spin on an all time favorite classic!

We meet Jane while at Miss Preston’s School Of Combat as she is training towards her graduation date. Upon completion, girls from this school are purchased to work for rich white women as their attendants. An Attendant is specially trained to kill Shamblers aka zombies. It is believed that black people have a stronger immune system to combat the bite of a zombie however, we do still see some who are turned after being bitten just not as many. Nothing about enrollment in this school is voluntary, the Native and Negro Reeducation Act is basically a round-up of black & Native children to do all the Shambler killing in defense of white people. Right from the start I knew Jane was going to be one of my all time favorite characters. We get to know Jane through her inner dialogue & the commentary she makes on the society they live in which mirrors our own current day in many ways. Jane is not someone who can easily be sold a dream, she’s very aware of the realities of her world and could care less about manners & etiquette. These are all things Jane knows are used as a method of control by white people in power. Nonetheless she continues her studies with some pushback here & there, in order to make her mother back in Kentucky happy. Jane is training in Baltimore & every chance she gets she writes her mother. The letters range in emotion & were meant to keep her mom updated on her training, these were a nice touch in between chapters & I found myself looking forward to the next correspondence.

The Mayor of Baltimore has led everyone to believe that the city has rid itself of the Shambler epidemic & its citizens are finally safe. Jane soon starts piecing together the pieces of the puzzle & realizes just how perilous the situation is in the cities on the East side of the United States. We see Philly, Baltimore, Maryland all affected but our story doesn’t just take place on the east coast. We see a shift to the West Coast & get a taste of frontier life but it’s also the setting for which the white people in this book see opportunity to digress to the times before slavery was abolished.  This book at its core is about slavery & the different forms it may be disguised as but in the end it’s all the same. There were many lines in this book that I found myself having to re-read saying to myself….”where have I heard this before?” when the answer is all around me, it serves as a reminder of the world we live in. We have a long ways to go…

In Jane we have a strong black woman who tries to mind her mothers advice but will always follow her heart in standing up for what she believes in. She’s not for one second going to forget anyone who does her wrong, she had me rooting for her from page 1. Dread Nation also gave us one unlikely sidekick in Katherine, another girl training to be an attendant. Katherine is described as being “passing white” which was explored throughout the book. The guilt that comes along with being someone who is passing white as well as Colorism experienced by many. Jane herself battles internally with the thoughts she has on Katherine’s pretty features, often times reminding herself it’s not Katherine’s fault she was born that way. I honestly feel this gave Jane a more realistic feel, she isn’t perfect and she holds a ton of compassion inside not out for display. Katherine is the opposite of Jane in that she really does try to follow all of the rules and lives for proper manners & etiquette. I had so many laugh out loud moments seeing Katherine refuse to battle w/out her constricting corset. The friendship between Jane & Katherine is what I want to see in YA! they may have been frenemies at one point but they have each others back when differences are cast aside. We also see sexuality touched upon with Jane possibly being bi-sexual, not 100% sure since she didn’t identify as such but does express attraction to females & having kissed a girl. We also have a character who may be asexual & expresses no desire to be in a relationship or have romantic feelings towards anyone. The inclusion of characters on the LGBTQIA+ spectrum is very much appreciated by this bookworm! 💜

Reading Dread Nation had me on a serious rollercoaster ride of emotions and I really wasn’t expecting it to be this type of read. I had a couple of outright angry moments at the mentality the white people in this book carry. It really is no different from many in our real world. Many scenes led me to feel such profound sadness at the injustice of it all. Ultimately I cam away empowered by this read, I do believe we need more books like this one. More authors like Justina Ireland so that the uncomfortable truths of the world are laid bare & change is brought about. Make no mistake, this isn’t just a book about zombies. This book carries a message & will leave such an impact on you if you read it with an open mind and a willingness to take off those rose colored glasses.

It’s been a minute since I did a Giveaway on the blog but I was inspired after I finished Dread Nation & just want to get more bookworms reading & loving it as much as I did! well at least I hope y’all do 😆🤞🏼 I do hope to have more Giveaways coming your way soon so stay tuned for that 😉

1 Winner will receive a hardcover copy of Dread Nation by Justina Ireland!