Happy Sunday Bookies!!! this is my 1st time participating in Megan@BookSlayerReads Standalone Sunday, a feature where you select a book (not part of a series) that you loved & would recommend to others. Super excited to be participating in Megan’s feature since i’ve been eyeing it for weeks & racking my brain for a good standalone I could post. It seems like lately series are the norm but I would love to get some more standalone’s read & this seems like a great source for motivation. On to this Sunday’s pick… 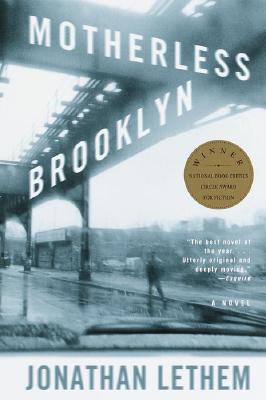 Lionel Essrog is Brooklyn’s very own self-appointed Human Freakshow, an orphan whose Tourettic impulses drive him to bark, count, and rip apart our language in startling and original ways. Together with three veterans of the St. Vincent’s Home for Boys, he works for small-time mobster Frank Minna’s limo service cum detective agency. Life without Frank Minna, the charismatic King of Brooklyn, would be unimaginable, so who cares if the tasks he sets them are, well, not exactly legal. But when Frank is fatally stabbed, one of Lionel’s colleagues lands in jail, the other two vie for his position, and the victim’s widow skips town. Lionel’s world is suddenly topsy-turvy, and this outcast who has trouble even conversing attempts to untangle the threads of the case while trying to keep the words straight in his head. Motherless Brooklyn is a brilliantly original homage to the classic detective novel by one of the most acclaimed writers of his generation.

This week I chose Motherless Brooklyn by Jonathan Lethem, a book that I read in college as part of my required reading. I didn’t know it then but this would go on to become one of my most favorite detective tales that has since stayed with me. I am hazy on many of the smaller details but I loved the narrator Lionel Essrog an orphan with Tourettes Syndrome & OCD. Lionel ends up working for Frank Minna (mobster) as muscle up until Frank is murdered. The book is narrated by Lionel & therefore you’ll get random bursts of his Tourettes as well as his need to count things as he sets out to solve the mystery of Frank’s murder. I fell in love with Lionel’s character & felt this need to see him be ok on his own. There are many heartfelt moments as well as humorous ones…straight out laugh out loud moments. I loved seeing Lionel navigate Brooklyn (my home sweet home lol), the borough isn’t portrayed in a positive light but I believe people have forgotten Brooklyn’s past before gentrification. I’d recommend Motherless Brooklyn to anyone who enjoys a good detective novel & wouldn’t mind being inside the mind of a person with Tourettes & OCD since it is narrated by the character with these mental disorders.

“Tourette’s is just one big lifetime of tag, really. The world (or my brain—same thing) appoints me it, again and again. So I tag back. Can it do otherwise? If you’ve ever been it you know the answer.”
― Jonathan Lethem, Motherless Brooklyn

“Guilt wants to cover all the bases, be everywhere at once, reach into the past to tweak, neaten and repair. Guilt like Tourettic utterance flows uselessly, inelegantly from one helpless human to another, contemptuous of perimeters, doomed to be mistaken or refused on delivery.”