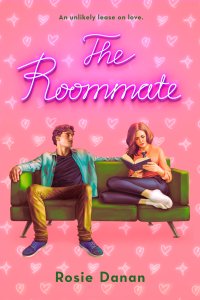 🖤ARC provided by author in exchange for an honest review🖤

This sex positive story about two people who unexpectedly end up being roommates was a fun page turner. Clara has followed her childhood best friend in a move across country in a case of unrequited love. When they get there, her BFF gets notice of his band landing a gig and leaves her his apartment. There she meets Josh, the roommate she didn’t sign up for. Clara comes from a wealthy Manhattan family, her entire life goal has been to stay out of the rumor mill. After a few scandals she’s seen her mother weather, she doesn’t want to be a cause for more. This is why she decides to tough it out & not go running back home. Josh is pretty chill, described as a dreamy Zac Morris from Saved by the Bell type. He’s the polar opposite of Clara who comes across a bit uptight. There’s undeniable attraction when they first meet but a simple google search leaves Clara wide eyed. Josh works in the sex industry and is exactly the publicity Clara is trying to stay far away from however, running back to NYC just isn’t an option. Clara knows that would be the easiest route to take but in doing so, she’d be proving to her family that she’s driven by impulse and emotion. The family who has already cast aside her aunt as the black sheep of the family for a very public affair. Instead, Clara decides to indulge in her curiosity by sticking round and getting to know him a bit better.

I appreciated the discussion on the sex industry, specifically the negative stigma society has placed on sex workers. Also, LOVED the positive discussion on the female orgasm as well as body exploration through self pleasure. Although Clara and Josh come from very different backgrounds, they both feel passionately that women deserve better sex. We follow them as they join together to bring sexual awareness & empowerment to women by using their individual talents and knowledge. The chemistry is wicked intense, the steamy scenes are a 10 because Josh clearly appreciates and understand the female body. He’s super respectful while also confident and smooth which in turn helped Clara feel more at ease and step into her own power. We also get an inside look to the trash treatment many sex workers get in the industry and the fact that many of it isn’t talked about. Society has already deemed their profession something to look down on which makes it just as hard to want to speak up. One of my fave characters Naomi Grant who is an ex of Josh, has managed to get control of her narrative as a sex worker. She embodies confidence and body positivity but like Josh, is one of the few who have learned the ropes well enough to not let anyone low ball them. Relationships are also discussed since its is something many outsiders have wondered about…can a sex worker manage to have a successful relationship? I’d say the verdict is still out on that with it depending on the individual because at the start of it all Josh is having relationship/trust issues. If you’re looking for a read that offers a perspective we don’t often see, The Roommate delivers while also keeping it fun and sexy!

4 thoughts on “Spoiler Free Review: The Roommate by Rosie Danan”