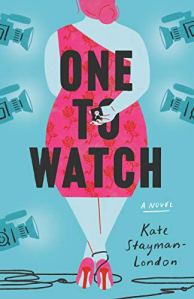 Title: One to Watch

Stylish plus-size fashion blogger Bea Schumacher has just experienced some heart break. Alongside one of her closest friends, she sets out to watch  the very popular dating show The Main Squeeze. While watching she starts to actively tweet about the lack of diversity each season. Her tweet garners a ton of traction from others who’d also like to see the show diversify their cast & main squeeze. Be a doesn’t know the show has just experienced some major changes behind closed doors as far as show runners. Saving the show has now been left in the hands of a new director who sees Bea’s tweet & thinks it to be the PERFECT opportunity to raise ratings. Never before has the show cast a plus- size main squeeze & Bea seems vocal enough to possibly accept the role. Bea sees this as a moment for her to represent many who have been unlucky in love, to inspire confidence in others. She doesn’t anticipate how hard this gig really is or all of the back lash she’d be exposed to for being a plus-size female. Something she has had to deal with in the past but never on this big a scale on national television.

This is not the story of a woman who is 100% confident in her skin all of the time. This is the very accurate portrayal of what some women have dealt with when judged by a society not yet ready to accept beauty in all shapes & sizes. It is harsh & brutal to read all of the cruel things viewers said about Bea while watching the show…yet these people do exist. It was triggering to read as someone who has always struggled with weight & have only within these last 2 years felt comfortable in my own skin. Nonetheless, I experienced my fair share of cruel moments & found this story inspiring. This is a story about a woman who found strength & beauty within. She wasn’t willing to settle for anyone who didn’t see her as the truly phenomenal woman that she is!

Bea Baby! I adore you! I shed tears reading some of the disgusting vitriol spewed her way & wondered in amazement at her strength. Yes, she did have moments of weakness but she legit stood up & dusted her shoulders off each & every time. Bea wasn’t confident all her life, she had to find that within! as a matter of fact she spent most of her youth covering her body. She didn’t love herself at the start of this story & allowed herself to get caught up in a triangle she had no business in. Did I enjoy reading that? no I did not. I also know how dark a place it is when you lack self love & self worth. She could’ve bowed out many times throughout but knew that just as there were those humans who couldn’t accept her for her outward appearance, there were many counting on her. Bea at the end of the book is who I’ve worked very hard to become, someone who knows they’re worthy of a greater love.

I’ve had some time away from this book to think on my rating & still rate it 5 stars. Not only for enjoyment (although it was fun once we started seeing Bea enjoy dating some of these men) but for the feelings it invoked in my reading experience. Were there things that could’ve been better? Yes absolutely! the contestants could’ve been fleshed out but instead their ethnicity/race were briefly mentioned once. Considering the whole point was to advocate for diversity, it would’ve been much more appreciated & well received had we gotten more from the men. In no way do I believe that it would’ve taken away from Bea’s story. In fact, my curiosity heightened at the end to read a book from the POV of Bea’s black love interest.

I saw a lot of my personal journey in Bea’s story & a lot of it is ugly and painful. I wouldn’t pick this book up if I’m looking for a confident woman who is all about body positivity because that is not Bea. She’s had a rough go at loving herself & wanting more than second best when it comes to love. Personally, this story resonated on so many levels. That feeling you experience when you finally go out with someone who sees your beauty…yea you definitely question if it’s real. You’ve grown used to the feeling of not quite measuring up but in reality you were just investing your time in the wrong people. Bea had to learn this & I cheered her on all the way to that realization.

Hello Readers! I come to you with a very late June Unboxing but I didn’t want to post any spoilers for those who receive Owlcrate. Last month I actually skipped the unboxing…more like it slipped my mind…but umm yea I actually like doing these since It gives me an opportunity to hear what you all got in your BOTM boxes & your thoughts on the Owlcrate selection. Some months are better than others, but I’ll admit that I’ve been pretty happy with the last few mths. The April & May Owlcrate boxes (The Upside of Unrequited & Eliza and her Monsters) were a nice surprise because I was lucky enough to have read galleys of these books & LOVED them to pieces. On to my unboxing…

I had seen Sandcastle Empire make its rounds on all of the bookish platforms & immediately added it to my TBR. I heard that it had LOST vibes & there was a time where I lost my head over that show & binged before binge was even a thing! let’s not talk about the last season cuz I skipped it once it started spiraling out of control. I digress…my point is that I haven’t found anything quite like the show & Sandcastle instantly appealed to me for that small comparison lol *fingers crossed*

I’m also VERY pleased to see New World Rising in my box since I have been following Ben over at OfTomes publishing & have added every single book of theirs to my TBR. Not only are the covers all S-T-U-N-N-I-N-G but the synopsis are all sOoO Good! lol *not that fancy with words* The author is a sweetheart and I will be reading & reviewing New World Rising here on LairOfBooks 😉

A bit of a confession here, I have been TERRIBLE in regards to reading the books I’ve been selecting every month for Book Of The Month *sobs* yet I can’t seem to stop picking a book each month *addicted to books* so this month I decided to add a book I already read & loved as my add-on. I was lucky enough to read a galley of A Million Junes & included it in my Top Ten Tuesday as one of my favorites for 2017 so far (see here). Loved it to pieces, it brought back many memories of my own dad & already owns a special place in my <3. The other book I selected had to be the quickest selection I’ve ever made LOL! I mean, we’ve all seen pictures of The Seven Husbands of Evelyn Hugo ALL over social media. The books is GORGEOUS & screams HOLLYWOOD! This will probably be the book to break me out of the bad habit, it screams summer read & so I shall read this summer 😉

What are your thoughts on the June Owlcrate box? Have any of my bookish peeps read The Sandcastle Empire? For my fellow BOTM subscribers, what were your selections for June? also, if you subscribe to any other boxes & have a unboxing, drop your links down below <3’s!