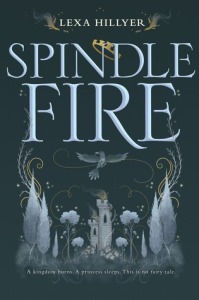 HUGE thanks to HarperCollins, Edelweiss, and Lexa Hillyer for the ARC copy of Spindle Fire.

A kingdom burns. A princess sleeps. This is no fairy tale.

It all started with the burning of the spindles.

It all started with a curse…

Half sisters Isabelle and Aurora are polar opposites: Isabelle is the king’s headstrong illegitimate daughter, whose sight was tithed by faeries; Aurora, beautiful and sheltered, was tithed her sense of touch and her voice on the same day. Despite their differences, the sisters have always been extremely close.

And then everything changes, with a single drop of Aurora’s blood—and a sleep so deep it cannot be broken.

As the faerie queen and her army of Vultures prepare to march, Isabelle must race to find a prince who can awaken her sister with the kiss of true love and seal their two kingdoms in an alliance against the queen.

Isabelle crosses land and sea; unearthly, thorny vines rise up the palace walls; and whispers of revolt travel in the ashes on the wind. The kingdom falls to ruin under layers of snow. Meanwhile, Aurora wakes up in a strange and enchanted world, where a mysterious hunter may be the secret to her escape…or the reason for her to stay.

A dark tale is spun in Spindle Fire…when baby Aurora is born, the last of the powerful faeries that used to rule the land pay the kingdom a visit. They bestow certain gifts of beauty & grace in exchange for tithing her voice and sense of touch. The King & Queen accept these tithes but it is when the Faerie Queen interrupts & asks for the child’s youth that they draw the line. The Queen then places the curse of death on Aurora by her 16th birthday. It is her half sister’s involuntary sacrifice that offers up some hope, Isabelle’s sight is tithed by another fairy who claimed she could reverse the curse & instead of dying…Aurora would one day be put into a deep sleep…

As preparations are made for Aurora’s wedding, plans are also being made to send Isabelle away since she is viewed as troublesome. Isabelle who is very much a free spirit makes a run for it with her best friend & love interest Gil who worked in the castle. Aurora hears of Isabelle running away & decides to go and look for her. She stumbles upon a cottage with a Spindle & whelp we all know how the story goes lol. I appreciated the turn this story took in originality. After Aurora pricks her finger she finds herself in another world created by the Faerie Queen’s sister. So, it’s not like she’s just asleep the duration of the story, she’s busy in her sleep trying to get some answers. It is within Aurora’s dream world that we get to know the story of Malfleur (Faerie Queen) and her twin sister Belcoeur…

Aurora & Isabelle are our MC’s, they are half sister’s with a language all of their own making. Isabelle is blind & Aurora is mute, they communicate via a series of taps on each other’s hands. They’ve had years to perfect their way of communication and can easily finish each others thoughts. Although they are half sister’s, Aurora is the daughter to the Queen and therefore is treated as a royal. Isabelle on the other hand receives less than royal treatment & is viewed by the court as trouble for her rebellious nature. Since this story is told in alternating first person POV chapters, we get to know these girls and their individual traits. Aurora loves romance novels that end with the prince swooping in & Isabelle can’t fathom the idea of being tied down by anyone. The sister’s are complete opposites, Aurora knows she was born to marry into royalty and is OK with that. Isabelle on the other hand would rather be chasing the next adventure far away from the castle. I was much more a fan of Isabelle, her chapters were def more exciting and even her approach to love seemed more realistic. We get introduced early on to Isabelle’s best friend Gil who is also her “love interest” and theirs is a complicated relationship. It seems like Isabelle has love for Gil more so than actually being in love with Gil. Later on in the story she meets the one that makes her question her actual feelings. I appreciated that her feelings were made known from the start of the story & it made for a more interesting progression. Now I can’t say the same about Aurora’s love interest which felt like a bad case of insta-love. I say this because typically insta-love doesn’t really bother me but I guess when contrasted against Isabelle’s, it stood out more in a bad way. I actually really enjoyed the Faeries that were introduced and their dark history. Perhaps more than Aurora & Isabelle’s story line, I looked forward to learning more of Malfleur & Belcouer. The faeries may have played the role of supporting characters yet it felt at times that they held the real meat of the story. I hope that the sequel sees more from these dark magical beings that once ruled the land.

I’m a sucker for all things Sleeping Beauty, probably because she’s the princess who I feel got the bad end of the stick. She doesn’t have little birds cleaning & sewing her clothes while she sings. She doesn’t get talking tea cups & kettles to keep her company or a vast library to sulk in. No, she legit gets put to sleep & laid to rest in a glass case while the 7 dwarfs try to get her true loves kiss *major eye roll* LOL! so it’s safe to assume that Spindle Fire caught my immediate interest. I loved the darker tones in this re-telling & the fact that Hillyer changed something that I for one could’ve done without in the original lol. However, Spindle Fire was told from Aurora & Isabelle’s POV’s and if i’m being honest, I found myself enjoying Isaeblle’s chapters way more than Aurora’s. It wasn’t until the last chapters that Aurora won me over & by then I kind of felt short changed. This may just be my preference however, I will say that even with this holding me back, the pacing was on point with non-stop action. The world building was A+ particularly the faeries and their fall from positions of power as well as their need to tithe. This re-telling is unique, creative, and the story itself was enjoyable but it may be just be a case of writing style that made this a 3 star read for me. Spindle Fire is told in present tense/third person POV which makes for an awkward reading experience. I see tons of ways this story can go & have some wishes for it myself. I’d love to see more of Aurora reclaiming this re-telling & more of the faeries in this world in the sequel to come. The ending sets up the groundwork for book 2 nicely which means that yes, I will be reading the sequel 😉

Have any of my bookish peeps read Spindle Fire? if so, which sister’s POV did you enjoy more? 😉