*HUGE thanks to Gretchen from Chicnerdreads for her arc copy of The Valiant, Razorbill & Lesley Livingston

Lost to history, the story of the female gladiator has never been told. Until now.

Fallon is the daughter of a proud Celtic king and the younger sister of the legendary warrior Sorcha. When Fallon was just a child, Sorcha was killed while defending their home from the armies of Julius Caesar.

On the eve of her seventeenth birthday, Fallon is excited to follow in her sister’s footsteps and earn her place in her father’s war band. She never gets the chance.

Fallon is captured by ruthless brigands who sell her to an elite training school for female gladiators owned by none other than Julius Caesar himself. In a cruel twist of fate, the man who destroyed Fallon’s family might be her only hope of survival.
Now, Fallon must overcome vicious rivalries, deadly fights in and out of the arena, and perhaps the most dangerous threat of all: her irresistible feelings for Cai, a young Roman soldier and her sworn enemy.

A richly imagined fantasy for fans of Sarah J. Maas and Cinda Williams Chima, “The Valiant” recounts Fallon’s gripping journey from fierce Celtic princess to legendary gladiator and darling of the Roman empire.”

This is one of those books where Goodreads has pretty much spelled out the plot for you in their blurb so i’ll just add to it here & there. Perhaps the best part of The Valiant were the many plot twists along the way that kept me flipping pages til the very end. You quickly figure out that nothing is as it appears & the second half of the book has a different tone/pace than the first. We are first introduced to Fallon on the night of her 17th birthday, she is getting ready for her father’s festivities where she believes he will officially make her a part of his war band. The celebration itself ends up being the night that sets her on her true course after things take a very wrong turn. Faced with heart break, betrayal and murder, Fallon must pave her own path to freedom…

Our main protagonist Fallon quickly earned my respect from the very start when she opted to put her wants/career before a possible relationship. Fallon is ambitious, brave, and has known which path she wants to take ever since she was a little girl watching her older sister fight for her father. She’s had her sister as a role model & wishes to follow in her footsteps. Every day she practices riding her chariot and honing her skills in fighting. Her sister’s words always playing in the back of her head…

“Are you a weapon or a target? Choose!”
― Lesley Livingston, The Valiant

Fallon has chosen to mold herself into a weapon and is ready for any curveball that is thrown her way. I enjoyed Fallon’s character development along the way & seeing her take control of her life. In the second half of the book we get to see Fallon’s relationship with another girl who was also sold to be a Gladiatrix. Elka & Fallon’s friendship was actually my favorite part of this book. It’s rare when we come across positive female friendships on the pages we read & therefore I tend to appreciate that a whole lot more than say a love interest (jussayin lol). The exchanges & witty banter between these two also proved to be entertaining. Fallon does have a love interest towards the second half however their story isn’t too fleshed out. I got the impression that this being book 1 in a series (or trilogy, not sure) that their relationship will unfold in the 2nd installment. I was ok with this because it meant that their budding romance didn’t take center stage to Fallon’s journey/experience as a Gladiatrix. There are some other characters who I enjoyed however for fear of spoilers I won’t mention. I will say though, that I hope to get a bit more depth to some of the supporting characters that are pivotal to the story.

The Valiant is honestly a solid start to what has the potential to be a very entertaining new series featuring strong female leads. I immediately got Spartacus vibes when I started reading, and being a lover of that series I just knew I was going to devour this book. The first half of this book was a bit slow for me however, once I reached THAT point…you know the part in the story that sinks its teeth into you? yea THAT point lol, I couldn’t put the book down. I seriously took this book with me into the shower (not a drawn bath with candles that you see on tv) & read it through to the very end. The concept of female gladiators in a bloody Rome intrigues the hell outta me & the fact that this is a Historical Young Adult book made for some interesting familiar faces. We not only get to meet Julius Caesar himself but we also get Cleopatra & some actual facts were thrown in there to give it that authentic Roman history feel. I appreciated the fact that the author did not try to paint a pretty picture of life as a Gladiatrix & was actually very detailed in the brutalities experienced while training and while in the arena fighting for their freedom. I actually read the author’s note & I’m glad I did because in it I learned that Gladiatrices did actually exist. Through excavation, the remains of what appear to be female gladiators have been found. I’m a big history fanatic & these types of facts will always reel me in, knowing that they actually existed has increased my interest exponentially. I look forward to continuing with this series & seeing what Fallon has been up to since last I saw her in the Ludus. 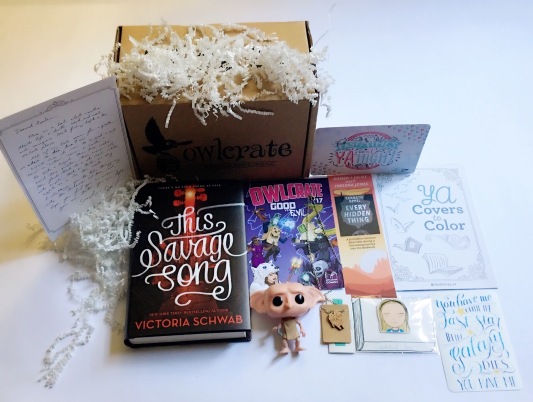 Owlcrate’s July theme is Good Vs. Evil. The Owlery delivered yesterday & this month I received a ‘Good’ box. I did have my heart set on ‘Evil’ but that’s only because I had my eyes on Maleficent HAHA! Did anyone get her in their box?  I’m in love with my little friend Dobby & very happy to have received a full sized Funko Pop. Super excited to receive This Savage Song by Victoria Scwab! It was on my highly anticipated 2016 new releases. Also in this box were the following items:

1 Millennium Falcon necklace from Vector Engraving
1 Alice in Wonderland magnetic bookmark (back of Alice’s head says “I know who I was when I got up this morning. But I think I must have CHANGED several times since the “-Lewis Carol

1 booklet of YA book covers to color

I LOVE This month’s box!!! Dobby now sits on my shelf next to Luna & Dumbledore (collection is growing) & This Savage Song is in the Hall Of Schwab. I’ll be buddy reading This Savage Song in the next couple of weeks with Gretchen over at Chicnerdreads 🙂